I Combed Cashmere From A Goat!

I was driving around in my town, unaware of any farms, when I stumbled upon some angora goats (well, they were behind a fence). I was excited, and I pulled over to try to find the owner, but she wasn’t home. She had some cookies out and a cigar box that said she was on the honor system, and cookies were fifty cents each. :)

I stopped back a few more times and still couldn’t find her. Finally, I ran into a neighbor who told me her name, so I went home, found her number and called her. Contact, yay!

I went there wanting to see mohair fleeces, and I loved the farm in general, but I was disappointed in the fleeces. Then she happened to mention that she had recently rescued a couple of neglected cashmere goats, and she could see why, because they were feisty. She had combed one of them (tan cashmere - and she was willing to part with the fiber, as she is not an active spinner, yay!). She couldn’t catch the other one (cream cashmere), so I, um, offered to help.

I went back early the next morning. We cornered the goat and tied her up. The woman held the goat while I combed. I forgot to take pictures. Oops.

The goat wasn’t very friendly, and it was sort of a constant battle. The goat should have relaxed when she realized I wasn’t going to harm her, but she didn’t. I got several ounces of cream cashmere (and I have several ounces of the tan from the other goat). I have dehaired some of it (I actually enjoy dehairing, go figure) and have started spinning it (expect to see a tiny sweater soon, hee hee). I got attacked by a rooster and chased by a cow. It was an interesting morning!! 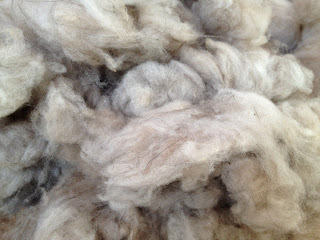 Here’s yarn I’ve spun from a little of it (that’s the tip of my left index finger - it looks weird in the photo): 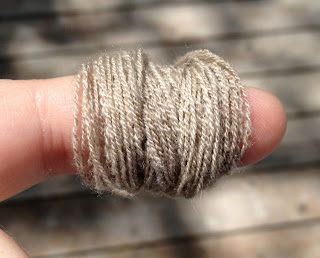