Lately I have been loving processing fleeces!  Here's a shot of a BFL lock I washed the other day.  YUM!  To clean it and preserve the curls, I piece together small locklets into a larger lock, hold one end and dangle the other end in a pot of hot tap water (I used to almost boil it, but I realized that it doesn't have to be that hot to be effective) with either dishwashing liquid or Unicorn Power Scour in it, gently swish it back and forth, turn to other end and repeat, then rinse in a pot of equally hot water the same way, never squeezing (unless it's a fine wool without curls to preserve), and lie it flat to dry on a towel. 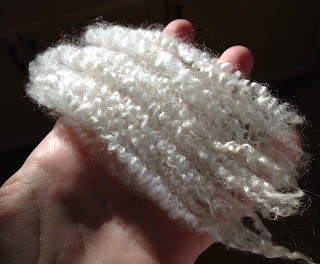 I'd like to share a couple of projects with you, from fleece to finished.  I found a (2 year old ram) cormo fleece (from Foxhill Farm) at Rhinebeck that would not allow me to leave it there.  The lock formation was incredible! 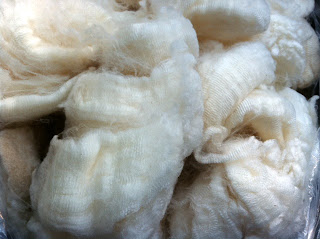 I washed a clump of it: 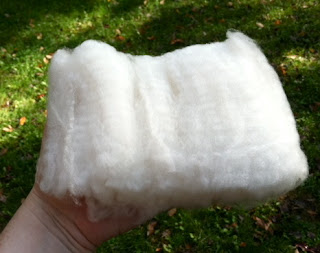 ...and spun most of the clump (in several separated locks, flick-combed at both ends) into a fluffy yarn sample. 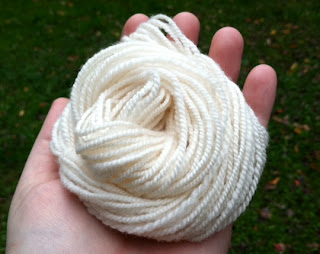 On a separate (but to be related by the end of this project) subject, I was trying to think outside the box with not only my spinning (trying to spin thicker than thread, for example), but also processing. Previously, I had processed fine Sharlea merino only one way (individually formed and washed locks), and that method is extremely time-consuming, though it does yield excellent results. I got the idea to wash a bit of a 13.4 micron Sharlea merino fleece the regular way (as opposed to one lock at a time) and then card it into a batt.

People generally do not card extremely fine wool into batts. When one does so, one runs the risk of creating a bumpy texture. I carded the washed fiber only once, so there was still some visible crimp left, but there were also some bumps (and some short fibers that could be picked out during spinning). Spinning this sample yarn was fun, because I let it become what it wanted to be, an UNBELIEVABLY soft, textured yarn (rather than the traditional extreme laceweight that most people think of as the only thing one can do with extremely fine fibers). This wool has a long enough staple length that I am not worried about the stability of the yarn, even though it is airy and textured. 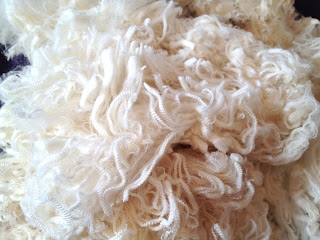 It had some dirty bits: 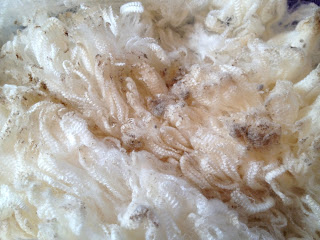 A bit of the washed fiber (I picked out all remaining bits of dirt, so it came out VERY clean): 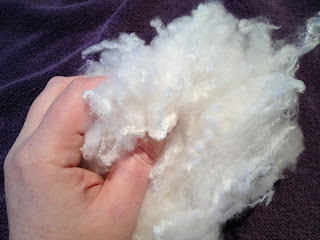 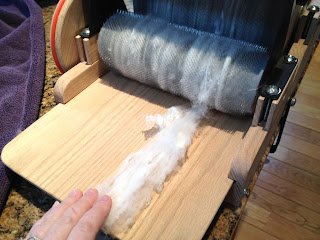 Batt (the softness is mind-boggling): 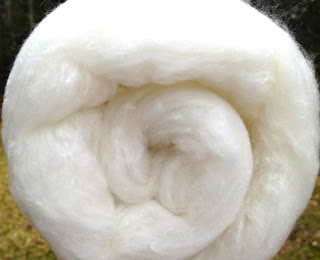 A small braid of roving that I dizzed from the batt: 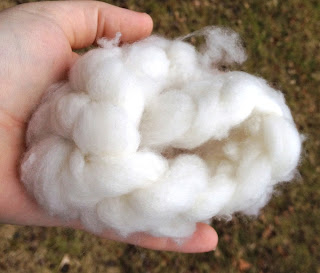 The sample yarn I spun from the braid: 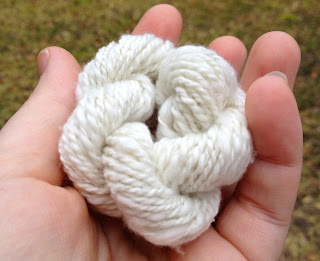 In a way, it's such an expensive fiber that I feel as if the lock method shows appropriate respect for it whereas this method doesn't.  On the other hand, extreme softness is wonderful, and this yarn can be knitted much more quickly into something than an extreme laceweight yarn can.

Here's the tie-in to the cormo...I had enough yarn in each sample for *one* newborn sock.  So here you go (cormo at the top and Sharlea merino at the bottom): 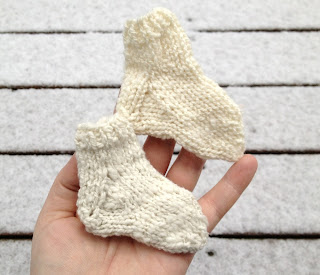 Now onto the second project...I used my regular (time-consuming) method for washing Sharlea merino locks one at a time. I took a small lock and spun this 2-ply thread on a spindle. 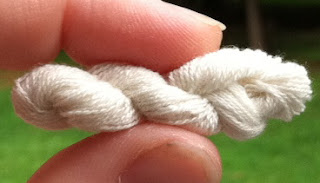 Today I knitted this sock (yes, I did) to my original pattern. 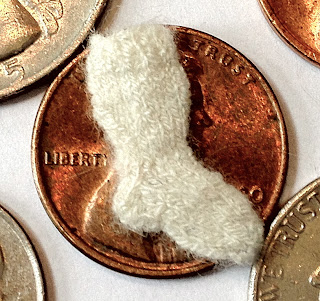 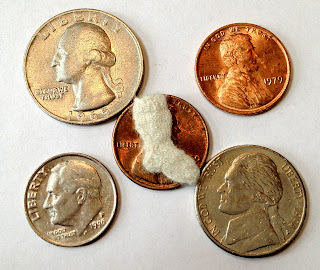 Had it been a little bigger, I could have done it in a short time.  This tiny, though, it took me over 4 hours.  I cannot bring myself, at this time, to knit another one.  Since nobody is actually going to wear it, I am going to consider the single sock a finished project.  :)